Powers of neutrality? The Baltic Sea Region as historical laboratory

The Danish flag painted on the side of a ship as a marker of neutrality, 1939. Photo: Unknown / Det Kgl. Biblioteks billedsamling.

“We must always take sides,” declared holocaust survivor Elie Wiesel in his 1986 Nobel Peace Prize speech. “Neutrality helps the oppressor, never the victim. Silence encourages the tormentor, never the tormented. Sometimes we must interfere.” In the face of Putin’s aggressive war against Ukraine, the question of neutrality or interference is more topical than it has been for a long time: Not only is the war a brazen challenge of Europe’s security architecture, it has also fundamentally shaken long-standing foreign policy principles. Having declared a “Zeitenwende” (watershed, or literally ‘turning of times’), Germany now invests billions in armament and sends weapons to a war zone. Non-aligned Sweden and Finland are openly discussing NATO membership, and even Switzerland seems to reconsider its famous neutrality as it supports international sanctions against Russian banks and oligarchs. “We are in an extraordinary situation where extraordinary measures could be decided,” was Swiss President Ignazio Cassis’ careful justification at a press conference on February 28.

But neutrality is cutting both ways in this conflict. Ukraine’s plan on joining NATO was one of Russia’s stated reasons for its invasion – and while some countries consider abandoning their neutrality, other voices demand with Moscow the ‘neutralisation’ and ‘demilitarisation’ of Ukraine. Neutrality, it seems, is shrouded in myths. What are the origins of these ambivalent narratives, and can the Baltic Sea Region, with its non-aligned ‘success stories’ Sweden, Finland and the autonomous Åland Islands, help us situate these?

Outsiders in the welfare state 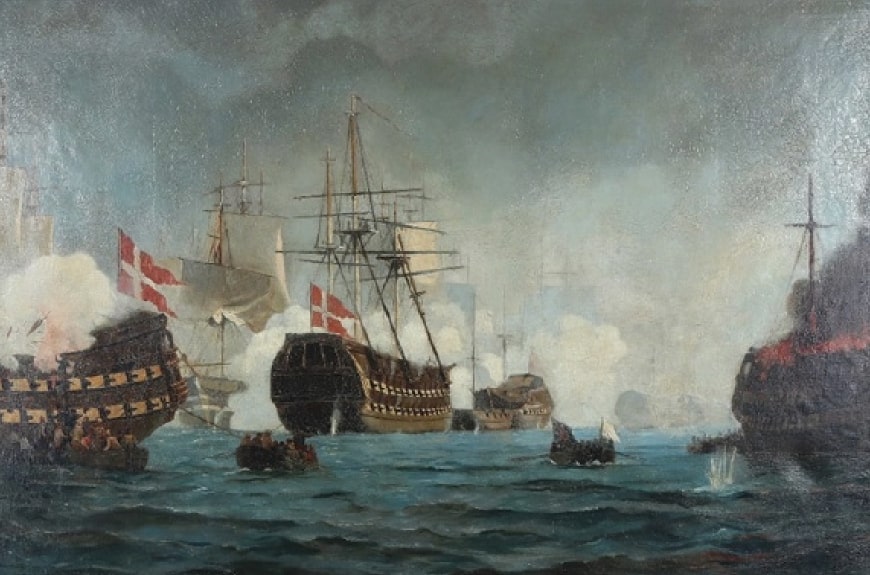 The Battle of Copenhagen by Christian Mølsted. The attack by the British occurred after the Second League of Armed Neutrality had broken apart following the assassination of its initiator, Tsar Paul I, in 1801. Photo: Wikimedia Commons.

As military non-involvement during war, neutrality (Latin ne uter = ‘neither the one nor the other’) has been applied since antiquity but differed significantly from today’s largely positive connotations. True to the motto “Whoever is not for us is against us”, the Roman Empire saw neutrality as political resistance to its superiority, while in early medieval martial law it became associated with disregarding religious duties like participating in the Crusades. Only in the 15th century did neutralitet and neutralité enter German and French law as terms for general non-partisanship in war and peace.

Without wanting to draw oblique historical analogies, early modern scholarly definitions are somewhat reminiscent of current debates: Niccolò Machiavelli’s (1469-1527) vilification of neutrality as political weakness, for example, brings to mind the international criticism of Germany’s initial reluctance to supply Ukraine with arms. The Frenchman Jean Bodin’s (1530-1596) praise of neutrality as an instrument of peace, however, not only aligns with Swedish and Finnish policy traditions, but seemingly supports also those who argue with the Kremlin for Ukraine’s constitutional renunciation of EU and NATO membership aspirations as a solution to the conflict. 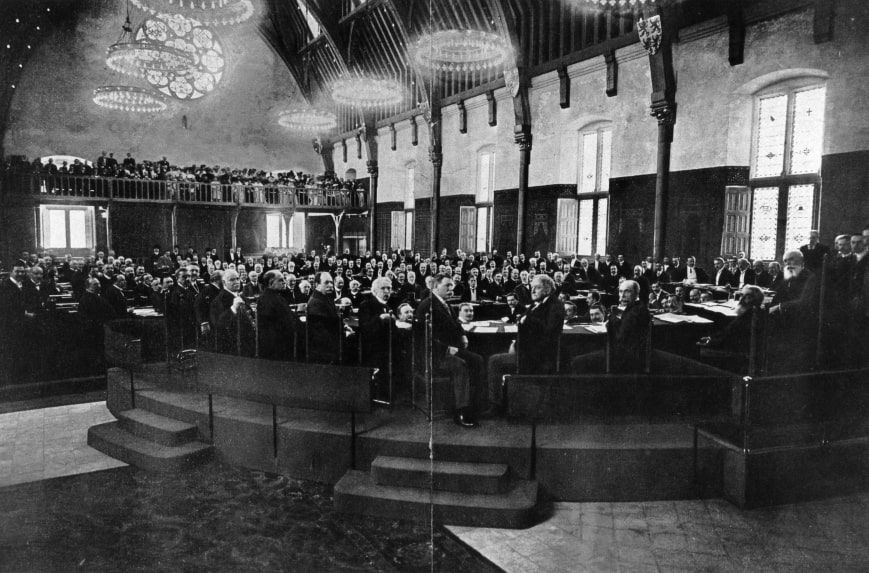 The Second Peace Conference at The Hague in 1907. Photo: Wikimedia Commons.

In the late 18th century, neutrality became formalised as an instrument of maritime law, for instance with the Second League of Armed Neutrality between Russia, Denmark-Norway, Prussia, and Sweden (1800-1801). The 1907 Hague Peace Conferences were the turning point for its codification in international law. Article 1 of the XIII Hague Convention states: “Belligerents are bound to respect the sovereign rights of neutral Powers and to abstain, in neutral territory or neutral waters, from any act which would, if knowingly permitted by any Power, constitute a violation of neutrality.” But only a few years later, World War I made clear how difficult it was to maintain neutrality in the crossfire of military conflict. In the following decades, only Switzerland (neutral since 1515), Iceland (1918), the Vatican (1929), Austria (1955), and Laos (1962) declared neutrality on the basis of international law.

By 1918, neutrality enthusiasm had thus seemingly dried up – but not the practical attempts for political non-alignment. Situated at the intersection of competing powers and ideologies, the Baltic Sea Region during the 20th century evolved into a veritable laboratory for neutrality, albeit with varying degrees of success.

“Lithuania must rely first and foremost on itself”

On the eve of World War II, the Baltic states used neutrality in a short-lived attempt to defend their sovereignty against Nazi and Soviet expansionism. After the German annexation of Czechoslovakia in 1938 fears grew that regions with high proportion of Baltic Germans, such as the Memel territory, could suffer a similar fate. On December 2, Lithuania ventured first to proclaim nonalignment, strengthened later with a neutrality law, as the country, “fully aware of its geographical position, must rely first and foremost on itself”. 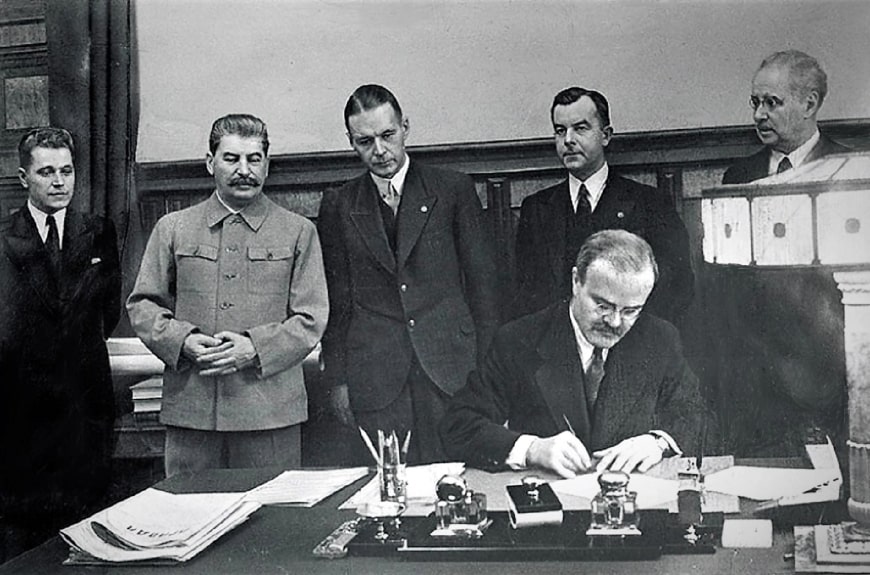 Although neutrality was protected by international law, the very same gave Estonia, Latvia and Lithuania also cause for concerns, as Article 16 of the League of Nations Statute stated that, “should any member of the League of Nations resort to war in disregard of its obligations […], it shall ipso facto be deemed an act of war against all other members of the League.” Though reminiscent of NATO’s principle of collective defence, Baltic politicians at the time feared that the Soviet Union might invoke this security clause to justify the use of Baltic ports as transit zones for its troops – an easy springboard for occupation. The signing of Soviet-Baltic mutual assistance treaties in autumn 1939 should have further secured the neutral status. But in return for mutual recognition of sovereignty, it also authorised the Soviet Union to establish military bases on Baltic territory. True to the Baltics’ fears, these did indeed become gateways for invasion, occupation and subsequent incorporation into the Soviet Union, bringing a swift end to Baltic neutrality.

The Nordic countries, on the other hand, have a long tradition of neutrality policies, dating back to the early 19th century. The loss of Sweden’s and Denmark’s status as great powers, their peripheral location and internal independence aspirations made neutrality appear as an effective means for preventing mutual aggressions, which was then codified in treaties on peaceful maritime trade and regional integration.

World War I upset this balance. The Three Kings Meeting in Malmö on August 3 to 4, 1914, sealed the Nordics’ joint commitment to neutrality, as King Gustav V of Sweden emphasised in his invitation: “It is my sincere wish to arrange as soon as possible a personal meeting […] to discuss our common interests as neutral states. I firmly believe that we must stand together in this present grave situation in Europe.” Still, neutrality prevented neither the temporary occupation of Denmark nor the post-war consequences of economic depression, which also hit Northern Europe hard.

Maintaining Nordic neutrality during World War II was even more difficult, with Sweden being the only Nordic whose territorial integrity remained untouched. In 1949, Norway and Denmark became founding members of NATO, while Sweden continued to expand its policy of neutrality within the framework of international law and the newly founded UN, establishing itself as impartial mediator in international conflicts. Complicated by its history and shared border with the Soviet Union, Finland opted for conciliatory neutrality known as ‘Finlandisation’. Due to continued Soviet influences and political self-censorship, though, it is today largely viewed in a negative light. Finland’s responses to proposals for using ‘Finlandisation’ as a possible role model for Ukraine have so far been accordingly hesitant.

In 1995, Sweden and Finland joined the European Union but not NATO, though working closely together and participating in joint manoeuvres – a provocation to Russia that repeatedly triggered threatening rhetoric. It remains to be seen whether this and the war will change Sweden’s and Finland’s military non-alignment.

A special case of Nordic neutrality is the autonomous Åland Islands. The archipelago was demilitarised in 1856 by agreement between Russia, Great Britain and France as part of the Paris Peace Treaty that concluded the Crimean War. After independence of Finland, to which the islands belong, this status was strengthened with the Convention on Non-Partition and Neutralisation of 1921 and in 1940 also confirmed by the Soviet Union. It differs, however, from Finland’s policy of non-alignment as it includes the prohibition of the “direct or indirect” use of the archipelago for “any purpose connected with military operations” in time of war. Today, the ‘Åland Model’ is an example for successful international conflict resolution, though hardly of use as role model for Ukraine. For one, this would require complete withdrawal of Russian troops from Ukrainian territory – including Crimea and Eastern Ukraine. For another, in the case of the Åland Islands, international organisations such as the League of Nations were crucial mediators and protectors. Russia’s recent violations of international law and its veto in the UN Security Council render such a path highly unlikely.

Sweden isn’t likely ever to abandon its traditional neutrality: This sample sentence in the Cambridge Dictionary might soon have to be revised. Screenshot: Anna Derksen.

Today, neutrality is an established instrument of states to secure their sovereignty and independence. Its conceptual and practical history, however, and the narratives created from it, remain ambivalent. This brief analysis has shown that neutrality can serve different purposes, such as protection against military attacks on national sovereignty by superior powers, or the defusing of potential sources of conflict in the Baltic Sea Region’s fragile security system. But neutrality as a legitimate measure of protection only works in combination with working defence capabilities – military armament, the protection by other states, and the observation of international agreements. Russia has blatantly broken with all of this. Its demand for a neutral, demilitarised Ukraine is not a serious solution to the conflict, but a smokescreen – albeit one significantly enabled by (falsifying invocations of) historical models that originated from similar kinds of power-political confrontation with Russia and its predecessors, the Tsarist Empire and the Soviet Union.