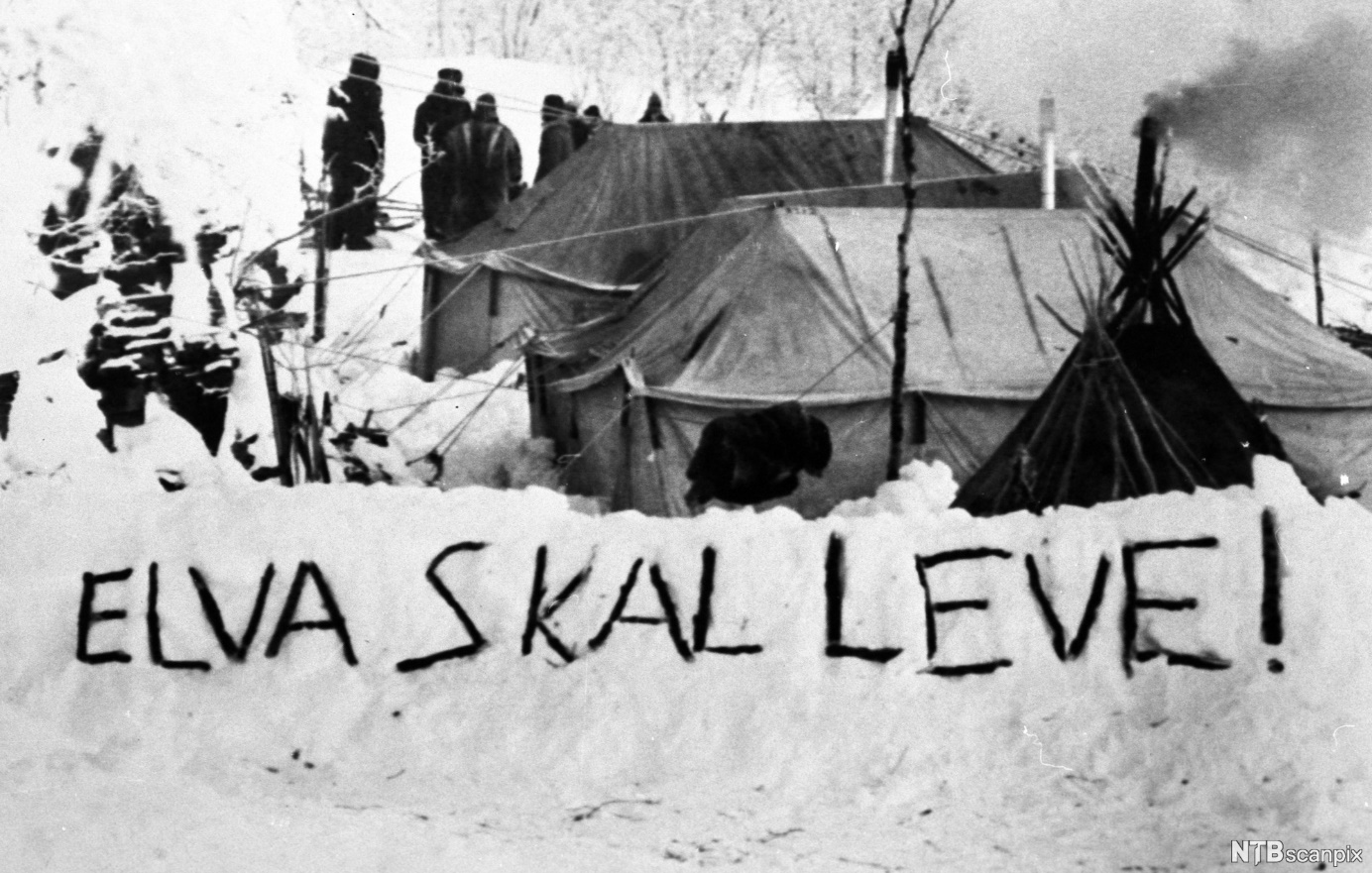 The construction of a hydroelectric power plant at the river Alta in Norway had profound effects on the local indigenous Sámi population as well as on international discussions on indigenous rights, water usage and biodiversity. Image: “The river must live!” Protest camp at the Alta river, Jon Hauge for Aftenposten / NTB Scanpix.

The third research frame deals with the relationship between different constructions of peripeties. However, it does not focus on alternative peripeties that compete for sovereignty of interpretation. This frame assumes that social systems consist of correlating social levels with their respective actors – individuals, families, firms, institutions, states, cultures – that often interact with each other in unpredictable ways. Every actor builds her or his own identity through narratives with their own specific peripeties.

Projects in this frame examine how, within a social system, these different peripeties on different social levels interplay with each other. How do peripeties on one level affect other levels? Peripeties like the fall of the Berlin Wall fundamentally test social institutions on the macro-level and provoke new biographic and collective narrations on the micro-level. In addition, a macro-peripety can be conceptualised as the ‘tipping point’, the moment where a previously stable state of being becomes unstable due to the incremental effect of numerous small changes. In a narratological sense, this means that apparently unrelated narratives on the micro-level, for example individual members of a family, employees of a company, or political parties in a party system, may interact with each other in such a way that they no longer confirm, or even invalidate an identity-forming narrative on the macro-level, for instance a family, a company, or a political system. In such situations, a new shared narrative and with it a new peripety will emerge on the macro-level.

This dynamic can be observed in all complex, multi-level systems: financial markets, ecosystems, and also social contexts. It governs crucial aspects of economic, historical or political discourse, and it is reflected, problematised or pushed forward by literature, film, and other art forms. Contemporary fictional accounts of the political transformations in the years 1989/1990, for example, use the Baltic Sea as site of overlapping macro- and micro-level-peripeties, both in literature and film (Judith Schalansky, Christian Petzold, Lutz Seiler and others).

Human production of meaning is fundamentally narrative. The IRTG “Baltic Peripeties” applies this premise to conduct innovative studies in the field of Baltic Sea region research.

The second research frame examines phenomena already understood as narrative and which, consequently, can be analysed with regard to their peripeties.