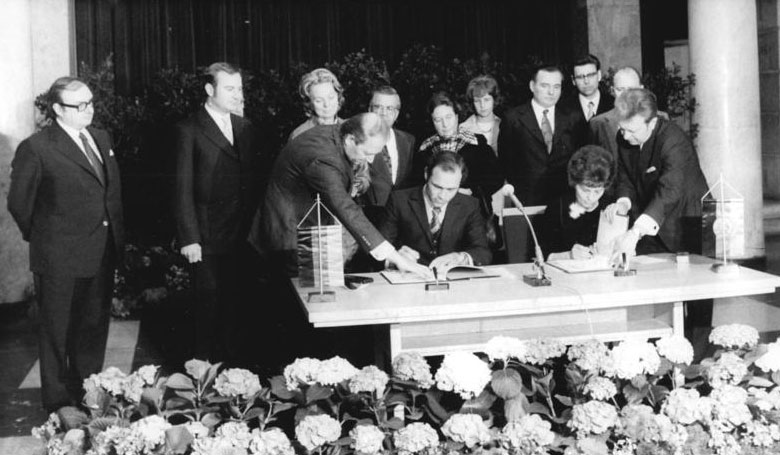 What is the narrative nature of defining concepts of health and disease in the context of Germany before and after reunification? Image: Signing of the intergovernmental agreement between the German Democratic Republic and the Federal Republic of Germany in the field of health care on 25 April 1974. Bundesarchiv, Bild 183-N0425-0036.

Human production of meaning is fundamentally narrative. The IRTG “Baltic Peripeties” applies this premise to conduct innovative studies in the field of Baltic Sea region research. The “Narrativisation” frame contains projects that examine phenomena yet to be recognised as narratives. The aim of these projects is to reinterpret those phenomena by using narratological approaches. This, for instance, includes statements and writings of political theory as much as grand national narratives and presentations of environmental crisis. The concept of peripety will allow us to reveal the narrative nature of the phenomena studied.

Consequently, the key questions include: What are the hidden peripeties of the examined phenomena? What can be understood, if phenomena are not conceived as they are currently constructed, but as products of certain peripety constructions? Projects using this research frame are therefore interested in examining areas of research relevant to the Baltic Sea, using the IRTG’s narrative paradigm, to explain plausibilities at the political, social, academic and aesthetic levels within the Baltic Sea region resulting from narrative meaning production.

What is, for instance, the role attributed to both national peripeties (such as Polish independence) and transnational peripeties (such as the end of World War I) in different national narrativisations of history? How do preventative structures such as disaster management and pre/modern insurance schemes emerge in relation to narrations of peripetic events and developments, e.g. shipwrecks, storm floods or ecological tipping points?

The second research frame examines phenomena already understood as narrative and which, consequently, can be analysed with regard to their peripeties.

The third research frame deals with the relationship between different constructions of peripeties.